"Events in which entire reef tracts or regions are completely bleached." reefresilience.org

Back
Mass bleaching is a phenomenon mostly caused by increased sea temperatures of 1-2°C, that was first identified in the early 1980's. When an entire section of reef is completely bleached, this is known as a mass bleaching event. If the temperatures are very high there is a lot of destruction over a short period of time however a slightly elevated temperature bleaches the corals at a much slower rate. Many geographical events that have an influence on the temperature of water. One example is the El Nino Southern Oscillation (ENSO) which reverses the usual air pressure bringing a high pressure and greater water temperatures to the Great Barrier Reef. The map below shows coral bleaching events and their severity that have occurred along the Great Barrier Reef from January 1998 to December 2007, as you can see there are a lot of patches of reef that have experienced high amounts of coral bleaching. 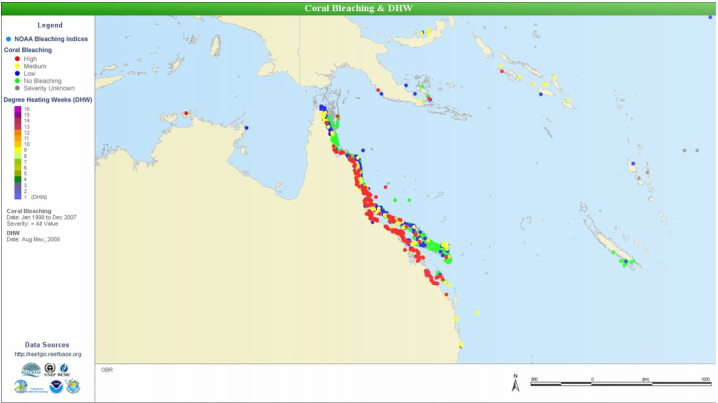