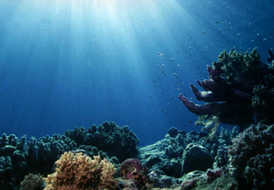 Corals need a certain amount of light, not too much but simultaneously they find it hard to survive with minimal light. They can only be found from 0-60m deep with diversity being lowest at the deepest and shallowest points due to an over exposure to sunlight and comparatively not enough sunlight. During summer solar radiation can increase the bleaching of shallow living corals as the tides get lower and the solar radiation increases. Solar radiation has been looked at as a cause of coral bleaching by people since, MacMunn 1903, who suggested that UV rays may be harmful to coral polyps. Since this suggestion was made other scientists such as, Catala-Stucki 1959 and Gleason and Wellington 1993, have looked at the possibility of this being a cause. In the study by Gleason and Wellington corals were moved to different depths and other corals were shielded from harmful UV rays and it was found that exposed corals or corals closer to the sea surface were subject to more coral bleaching than those with protection from the rays.
Back to Causes
Picture References
Pino, S.. (2007). News . Available: http://www.freewebs.com/warmplanet/news.htm. Last accessed 6.12.2012.